Encyclopedias by their very essence are monumental undertakings.

Even so, the size and scope of The Mississippi Encyclopedia, which catalogs the culture of a state celebrating 200 years of existence, are surprising on first encounter: 1,500 entries by 650 authors, 1,451 pages weighing in at nine pounds. And it took 13 years to complete. 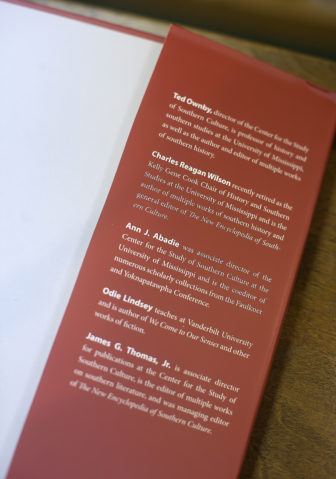 The most comprehensive volume ever written about Mississippi covers the expected topics: every county, every governor, numerous musicians, writers, artists and activists.

And there are essays on agriculture, archaeology, the civil rights movement and the Civil War.

Native Americans, nonfiction, poetry, politics and government are included, as are the press, religion, social and economic history, sports and visual arts.

Peggy Jeanes, editor emerita of Mississippi History Now, who contributed to the encyclopedia, said the book “conveys what Mississippi is. It’s like a box of chocolates. You can open it, but it’s hard to close it. It is such a remarkable work.”

“It is our hope that this book gives people pleasure through browsing,” said Ted Ownby, who along with Charles Regan Wilson served as senior editors for the book. “Someone may be looking up something and find several other topics of interest in doing so. Unlike the internet, where people can get distracted by emails and such, a book can hold someone’s interest for a longer period of time as the reader explores what lies within the pages. There will be a lot of surprises.”

The project began, as all do, with an idea. Seetha Srinivasan, former editor in chief of University Press of Mississippi and now director emerita, took her idea to Ownby and Wilson. Former University of Mississippi Chancellor Robert Khayat and his chief of staff, Andy Mullins, energetically supported it. Wilson, along with Ownby and Ann Abadie of the Center for the Study of Southern Culture, became involved in 2003. Glenn Hopkins, then dean of UM’s College of Liberal Arts, and Dan Jones, former chancellor of the university, also backed the project. 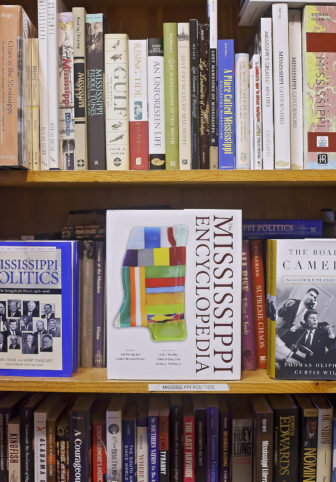 The Mississippi Encyclopedia on display at Lemuria Books in Jackson

As the players in the project came on board, the next step was funding. First came an appropriation from the Mississippi Legislature. Grants from the National Endowment for the Humanities, the Mississippi Humanities Council and the Mississippi Department of Archives and History helped sustain the project, as did funding from the University of Mississippi’s College of Liberal Arts. Funding also was provided by a major grant from the Phil Hardin Foundation and gifts from Lynn and Stewart Gammill and other supporters from the Center for the Study of Southern Culture. Between $125,000-$150,000 were raised for the project, Ownby said.

“This book is not necessarily a celebration, defense nor critique of Mississippi,” Ownby explained. “Instead, it studies how things happened and how people reacted to those events. There are examples of people thinking and about events and their interpretation of them.”

The editors of The Mississippi Encyclopedia identified 30 leaders in their fields to serve as subject editors. Further suggestions for topics came from other sources, including authors, editors, colleagues and friends.

“Each topic editor was a scholar,” Ownby said. “Each sent a list of 30 to 40 topics for consideration, and often they sent a list of potential authors.”

Once the book’s topics were chosen, managing editors Andrea Driver and Odie Lindsay worked with the editors and associate editors to consult with authors. 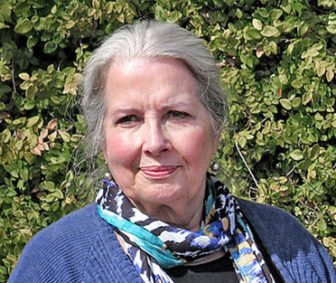 Jeanes, who wrote four of the entries in the encyclopedia, said she learned about the project at an annual Mississippi Historical Society meeting.

“Ted Ownby spoke at our meeting and encouraged those in attendance to visit the Center for the Study of Southern Culture website. I did just that, and there was a list of potential topics for the encyclopedia,” she said. “They were seeking writers who had knowledge of the topics. I chose three, then pitched a fourth and they told me to go ahead with it.”

The entries Jeanes wrote include an article on Ingalls Shipbuilding, “the state’s major employer,” and Entergy Mississippi.

“I was the editor and writer for Entergy for 13 years, so I knew it was a remarkable company and a strong corporate and civic leader,” she said.

While writing about those companies was easy for Jeanes, due to good sources, her other entries were more challenging. 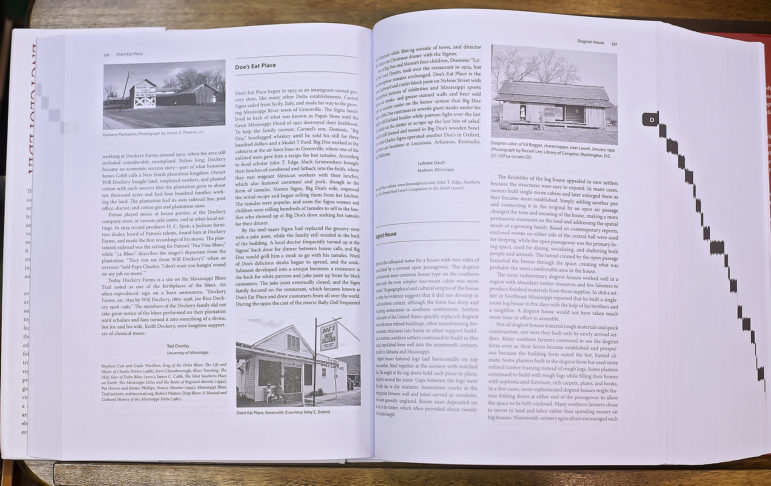 “The first was ABC’s Robin Roberts, who was on their list of topics,” Jeanes said. “She had just published her book, Seven Rules for Life, and it was not long after Hurricane Katrina, when Robin took the opportunity to broadcast from her hometown of Pass Christian, telling a national television audience that Katrina had hit the Mississippi Gulf Coast.”

The fourth entry Jeanes wrote was the one she pitched.

“I’ve been fascinated by Thomas Jefferson Young for some time now,” she said. “He wrote a beautiful book years ago about a sharecropper who sought permission of the land owner to paint his house white. It received great accolades and was chosen as a Reader’s Digest Book-of-the-Month.”

Much of the 13-year gestation of The Mississippi Encyclopedia was spent just updating entries. At its publication, those involved with the book admit that in some sense the book is already outdated. 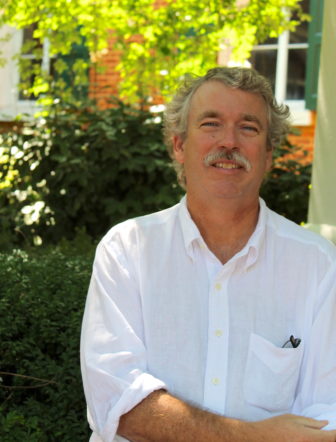 Dr. Ted Ownby, director of the Center for the Study of Southern Culture at the University of Mississippi

“Even so,” Ownby mused, “the idea of trying to include everything and everybody is daunting. There are people, groups and events that identify as Mississippian, and plenty of other stories and perspectives. I thought I might be defensive at first if people pointed out what didn’t make the book, but now that it’s published, I don’t feel that way at all. What we have is a really big book that people can learn from and enjoy, and even think about what would be there.”

“The truth is, I love all the entries,” he said. “Our writers did a great job with both the obvious topics and the most obscure and interesting ones as well. I love that there are entries that don’t conform to what most people may think about Mississippi — like the one about Euna Lee, a woman whose works were published in New York literary journals and who started a literary cultural exchange between the United States and Latin American countries.

“And there’s Juanita Harrison, a black woman who wrote My Great Wide Beautiful World, an autobiographical book about her travels around the world. I love learning about all the wonderful authors this state has produced, as well as the many musicians, like Wadada Leo Smith, a jazz artist who grew up in Leland. At age 15, his band director allowed him to do a jazz version of Fever during the halftime show of a football game. He went on to become one of America’s great jazz trumpeters, involved with dozens of albums, including his boxed set, Ten Freedom Summers.”

Stuart Rockoff, executive director of the Mississippi Humanities Council, said the book is a great reference resource for anyone who wants to know more about anything to do with Mississippi. 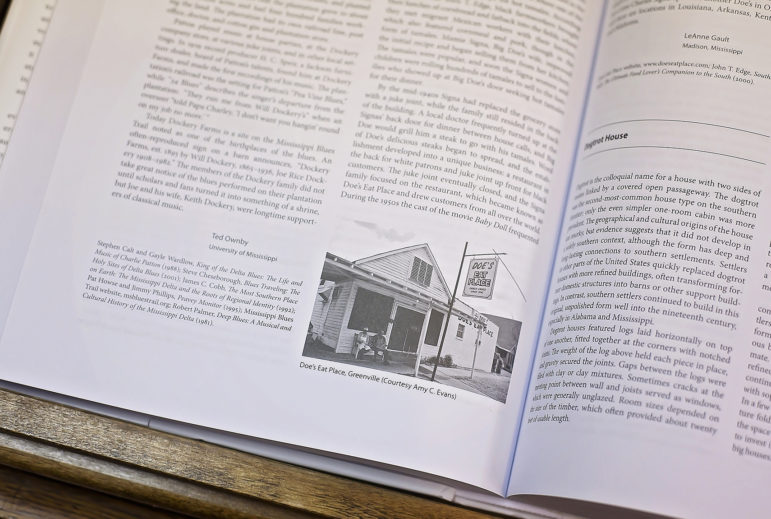 “I just used it the other day to look up a court case I was curious about,” Rockoff said. “The book is amazing. All 82 counties are in there, and it lists all the facts. I love that it’s written by scholars. The encyclopedia pulls together in one place the historical and cultural significance of our state.”

The Mississippi Encyclopedia is available at independent bookstores throughout the state, as well as online. Ownby, sometimes accompanied by Wilson, has been touring the state for book signings and talking about the book.

The book also is reaching a national audience, with an event at the Library of Congress in Washington, D.C., and a couple of signings in Atlanta in conjunction with the Mississippi in Atlanta Society. The book also was celebrated at the Mississippi Book Festival in Jackson in August. For ore information about The Mississippi Encyclopedia and book tour dates, log on to http://southernstudies.olemiss.edu.